ABC
Added to the database on October 8, 2008
Rate
(8 votes)
Cast & Characters | Broadcast History | Theme Song | DVDs | Watch Episodes | Photos | Trivia | Comments
Mork & Mindy is a science fiction sitcom that aired on ABC from 1978 until 1982 that starred Robin Williams as Mork, an alien who comes to Earth from the planet Ork in a small, one-man egg-shaped spaceship. Pam Dawber co-starred as Mindy McConnell, his human friend and roommate. In 1997, the episode "Mork's Mixed Emotions" was ranked #94 on TV Guide's 100 Greatest Episodes of All Time list.
Children who love Robin Williams as the voice of Aladdin or as Mrs. Doubtfire will get a blast out of the show that blasted him into the stratosphere, and made "Nanoo, Nanoo" a national catch-phrase. Mork & Mindy, a spin-off of a season 5 Happy Days episode, was a tailor-made star vehicle for Williams, who won a Golden Globe for this inaugural 1978 season. The role of extraterrestrial Mork from Ork gave free reign to Williams's stream-of-consciousness riffing as Mork observed life on Earth and reported back to his leader, Orson, on all that he learned about friendship, love, family, and emotions. As Mindy, the down-to-Earth Boulder, Colorado, girl who takes the stranded alien under her roof, fresh-faced Pam Dawber does her best to keep up. When Williams is really in the (Twilight?) zone, it's not acting: she does seem like she's dealing with someone from another planet. 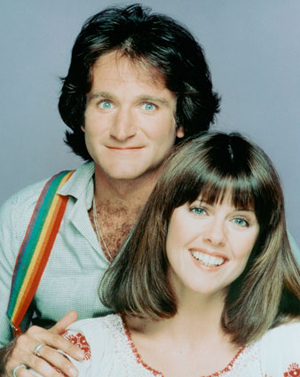 A rememberable episode is "Mork's Mixed Emotions," a tour-de-force that TV Guide ranked among the top 100 TV episodes of all time (#94, to be exact). Mork believes that emotions are bad, and tries to lock them inside himself, but they are unleashed in a lusty, happy, weepy, angry, envious torrent. Helping to launch Williams as a primetime player in the series pilot are Henry Winkler and Penny Marshall in their iconic roles as the Fonz and Laverne. Another notable guest star in season 1 is David Letterman as an abusive EST-like guru in "Mork Goes Erk." Mork & Mindy rapidly jumped the shark, and much of the '70s sitcom trappings have not aged well, but this first season is a giddy time capsule record of Williams at his most spontaneous and out of this world. Shazbot--the set contains no extras.