CBS
Added to the database on October 19, 1999
Rate
(27 votes)
Cast & Characters | Broadcast History | Theme Song | DVDs | Watch Episodes | Photos | Trivia | Comments
The Munsters is a sitcom that aired on CBS from 1964 until 1966 depicting the life of a family of monsters. It stars Fred Gwynne as Herman Munster and Yvonne De Carlo as his wife, Lily Munster. The series was a satire of both traditional monster movies and popular family entertainment of the era, such as Leave It to Beaver. 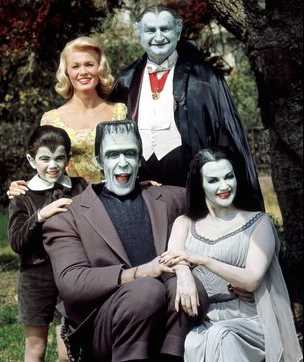 If there ever were a family that embodied the highest ideals of family values, the Munsters would qualify, despite the fact the father is a Frankenstein monster and the mother comes from a line of vampires and werewolves. A zany parody of family sitcoms, The Munsters is the story of the bizarre, but close-knit Munster clan. The family included Herman (a Frankenstein-like creature), a funeral parlor employee; his wife, Lily (a female vampire); their 10-year-old son, Edward Wolfgang (a werewolf); Lily's father, Grandpa (Count Dracula), a 378-year-old mad scientist; their "poor unfortunate" niece, the young and beautiful Marilyn, who was the black sheep of the family; and Spot, the family pet (a fire-breathing dinosaur who lived under the stairs). Their residence, of course, was 1313 Mockingbird Lane.

Buy The Munsters On DVD

The Munsters lived at 1313 Mockingbird Lane. They had a pet dragon named "Spot" that lived under the stairs.

Fred Gwynne graduated from Harvard in 1951 and performed in the famous "Hasty Pudding Drag Revue" there! He has authored/illustrated several children's books.

The series was brought back for three seasons (with new actors) 22 years later and titled, "The Munsters Today". The original Munsters TV show (except the pilot) had been recorded in black and white and the new program in color. When the episodes were all shown together later in sydication, the new series colors were toned down so that they wasn't so much contrast between the episodes.

Herman Munster worked for a funeral parlor called, "Gateman, Goodbury & Graves" and was always looking for a better job.

Lily's name in the pilot episode was Phoebe.

Grandpa Munster's Drag-u-la racer was shown in the closing credits of every episode of the 2nd season but only appeared in one episode.

Yvonne De Carlo had already been a huge Hollywood star when she took the role of Lily Munster on this series. Her greatest role was probably that of Mose's wife Sephora in, "The Ten Commandments". In 1964, movie roles for actresses over 30 were almost non-existant and Yvonne was 42 years old so she moved her career to the small screen although she did manage to land several additional movie roles after that, the final one being in "Sorority House Murders (1993)". She won the title of "Miss Venice Beach" in 1938.

Al Lewis achieved a Ph.D. in child psychology from Columbia University. At one time, he worked in a circus act. He appeared on numerous television shows, starred on the series, "Car 54, Where Are You?" and appeared in vaudeville ... burlesque ... and broadway. When the series ended, he opened a restaurant in Greenwich Village called, "Grandpa's".

Butch Patrick actually wanted to "retire" from show business but needed money. He formed a musical group called, "Eddie and the Monsters" to capitalize on his role on The Munsters. His father (Ken Hunt) was once a pro baseball player.

Beverly Owen worked behind the scenes for "The Ed Sullivan Show" and the "Captain Kangaroo Show" prior to her appearance on the Munsters.

Pat Priest's father was U.S. Treasurer from 1953 to 1961. If you have any U.S. currency from those years, you'll see his signature on it. Pat was one of the lucky recipients of a car from Elvis Presley. Elvis bought cars for quite a few people over the years. Today, Pat buys houses that need work, restores and resells them.