CBS
Added to the database on December 9, 2009
Rate
(16 votes)
Cast & Characters | Broadcast History | Theme Song | DVDs | Watch Episodes | Photos | Trivia | Comments
Hawaii Five-O is a police procedural drama series set in Hawaii that aired for twelve seasons from 1968 to 1980 The show featured a fictional state police unit run by Detective Steve McGarrett, portrayed by Jack Lord. The theme music composed by Morton Stevens became especially popular. Most episodes would end with McGarrett instructing his subordinate to "Book 'em, Danno" sometimes specifying a charge such as "murder one."
Opening with Morton Stevens's unforgettable theme music, Hawaii Five-0 followed the crime fighting adventures of Steve McGarrett (Jack Lord), who commanded a fictional Hawaiian state police force who reported to the governor. Many episodes would end with McGarrett telling his right-hand man Danny Williams to Book 'em, Danno! after they captured their quarry. McGarrett's archenemy was the Communist rouge agent Wo Fat, a criminal mastermind that McGarrett pursued for all twelve seasons. 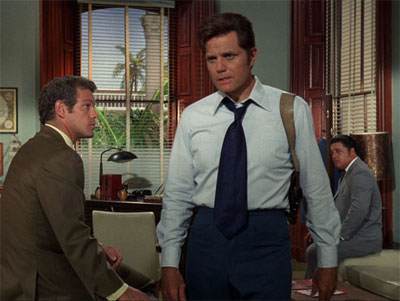 The first choice to play the role of Steve McGarrett was Gregory Peck but he didn't want the role. He starred in 18 more movies after rejecting the job so it's unlikely he was sorry about the decision! Who might have played his roles in movies like "The Omen", "The Boys from Brazil", and "MacArthur" if he'd taken the job?

There was a plan to have Jack Lord appear on the new TV series, "Magnum P.I." that started airing shortly after Hawaii Five-0 left the air since both series took place in Hawaii. That never happened but Magnum and his buddies did talk about "the guys over at Five-0" several times though in early episodes.

Jack Lord was the only cast member who stayed on Hawaii Five-0 throughout its full twelve year run.

The Hawaii Five-0 task force had to deal over and over again with a Red Chinese agent named "Wo Fat". They would always manage to stop his evil plans but they never caught him until the very last episode titled, "Woe to Wo Fat". It was obvious that a reunion show was on someone's mind though because Wo Fat was seen taking a file out of his boot, obviously intending to escape!

There was a Hawaii Five-0 TV movie in 1997. James MacArthur was in it but not as Detective "Danno" Williams. In the seventeen years since we saw him on the series for the last time, he had worked his way up to the Governorship of the state of Hawaii!

One of McGarrett's enemies who appeared in a couple of episodes was played by actor Gavin MacCleod. He played a pimp named "Big Chicken". Nearly a decade later, MacCleod would play the straight-laced character, "Captain Stubing" on the TV series, "The Love Boat".