ABC
Added to the database on October 20, 2008
Rate
(21 votes)
Cast & Characters | Broadcast History | Theme Song | DVDs | Watch Episodes | Photos | Trivia | Comments
Who's the Boss? is a sitcom that aired on ABC 1984 until 1992 and starred Tony Danza as a retired major league baseball player who relocates to Fairfield, Connecticut to work as a live-in housekeeper for a divorced advertising executive, played by Judith Light. Also featured were Alyssa Milano, Danny Pintauro, and Katherine Helmond.
Who's the Boss? was a standard sitcom--turned on its head. Sure, there was a mom, a dad, two cute kids, a house in the suburbs... and a live studio audience. But Angela Bower (Judith Light) was a single advertising exec with a son (Danny Pintauro) and Tony Micelli (Tony Danza) was a widowed ex-ballplayer with a daughter (future Charmed star Alyssa Milano). The Connecticut mansion belonged to Angela (along with the big '80s hair and shoulder pads) and Tony wasn't her boyfriend, but rather her housekeeper. Then there was her mother, Mona (the incomparable Katherine Helmond). The sexed-up, slightly cracked grandmother is a primetime staple, but in the former Soap matriarch's hands, the character was a cut above (and usually got the best lines). As Angela complains to her in the pilot, "You've sent me a man for a housekeeper!" "Oh, don't be sexist," Mona replies. "A man can do meaningless, unproductive work just as well as a woman." 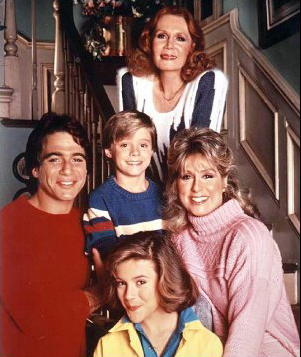 "Meaningless, unproductive work" is what Tony does for the Bowers--and does well--but he and Samantha (Milano) also become part of the family. Angela and Tony go on a number of dates with other people, but there's an obvious sexual tension between them. The show would continue to exploit that tension for eight seasons to great success (even inspiring a British version called The Upper Hand, with Honor Blackman as the "Mona" character). Helmond, meanwhile, would garner an Emmy and a Golden Globe for her efforts. Highlights include "Mona Gets Pinned," in which Mona takes up with a younger man, and "Angela's Ex, Part I," in which Angela reconciles with her estranged husband--who proceeds to fire Tony. Guest stars include Betty White (Mary Tyler Moore) in "Eye on Angela" and Danza's Taxi co-star Jeff Conaway in "First Kiss."

Who's The Boss? On DVD


View all Who's The Boss merchandise

Who's The Boss Trivia

The license plate on Sam's first car was a personalized plate. It read, "Sam's Car".

Both Angela and Tony were single parents on the series. Angela was divorced and Tony was widowed.

Angela got fired from the Wallace and McQuade agency at the beginning of the third season and opened her own agency. Her mother came to work for her adding a new area for conflict to the program (Man works for Woman AND Mother works for Daughter). Angela also got a boyfriend that season but the storylines tended to make you feel that she should really be with Tony.

The characters played by Katherine Helmond on "Who's The Boss?", "Soap", and "Everybody Loves Raymond" all lived in Connecticut!

Several things happened in the last season of Who's The Boss. Sam got married. Angela and Tony nearly tied the knot several times. Tony got a job in Iowa as a college baseball coach and Angela went with him. She missed her job too much and returned to Connecticut. After failing to find an acceptable housekeeper, Angela found Tony at her door to apply for the job. He had decided that giving their relationship another try was more important than his job.

Judith Light met her husband, "Robert Desiderio" when they were both appearing on the daytime drama, "One Life to Live". Judith won two Emmys, two Soapy Awards and a Soap Opera Hall of Fame Award for her work on that TV show! In fact, one of her performances received so much acclaim that it is used to teach in acting schools and TV Guide Magazine named it as, "100 Most Memorable Moments on Television"!

Alyssa Milano's background made her perfect for her role on the Who's The Boss TV show. Her heritage was Italian in real life and she was born in Brooklyn and grew up on Staten Island. Alyssa got her start at the age of seven when her babysitter tried out for a role for the first national tour of the play, "Annie". Her babysitter didn't get a part but Alyssa was noticed and she did! After that, she did television commercials and off-Broadway plays until her big break on, "Who's The Boss (1984)" at age 10. She has had some controversy in her career since then. She did a "Candies Perfume" commercial in revealing lingerie that some networks refused to air. The print versions of those commercials included pictures of a man applying perfume to her cleavage and a medicine cabinet full of perfume and condoms. "Teen People" and "Seventeen" Magazines refused to print those. She also posed nude in an issue of "Bikini Magazine". She became possibly the first most predominant woman whos nude photos were posted all over the internet. She greatly reduced her exposure there however when she successfully sued a web designer for $230,000! In addition to her acting skills, Alyssa also plays the flute and the piano. A picture of her was used as a model to create "Ariel" in the 1989 Disney film, "The Little Mermaid".

Tony Danza's roles on "Taxi (1978)" and "Who's The Boss (1984)" might lead you to believe that he's no more than a "not too bright" jock but in real life he has a bachelor's degree in history education (and besides ... his role on "Family Law (1999)" finally shows off his mental side). That's not to say that he didn't have athletic abilities too. He earned his degree on a wrestling scholarship. He also boxed professionally before acting and even for the first few seasons on "Taxi (1978)"! In fact, his acting career got its start when he met a producer at a boxing gymnasium in New York.

Danny Pintauro grew up (of course) and earned a degree from Stanford University. He is also an Eagle Scout. In a 1997 interview with the National Enquirer, he stated that he is gay. He said, "It turned into a positive thing. I had nothing to hide. I was not at all secretive about it. Everyone in my life knew." He has said that he often watches reruns of Who's The Boss because, to him, it's like looking through an old yearbook.