NBC
Added to the database on October 20, 2008
Rate
(9 votes)
Cast & Characters | Broadcast History | Theme Song | DVDs | Watch Episodes | Photos | Trivia | Comments
Wings is a sitcom that ran for eight seasons from 1990 to 1997 on NBC and that starred Tim Daly and Steven Weber as brothers Joe and Brian Hackett. The show is set at the fictional “Tom Nevers Field” airport, a small two-airline airport in Nantucket, Massachusetts, where the Hackett brothers operate Sandpiper Air.
A popular and well-regarded comedy that ran for eight seasons in the '90s, Wings was created by David Angell, Peter Casey, and David Lee, the team that worked together on Cheers and later created Frasier. Tim Daly and Steven Weber play two brothers, Joe and Brian Hackett, respectively, who parted ways many years ago when a woman left Joe to marry Brian. Joe, the straitlaced do-everything-right brother, is running Sandpiper Air, a small airline on the island of Nantucket that runs commuter flights to the New England coast, when he reluctantly offers a job to Brian, the carefree brother who's also a pilot. Others who work at the airport are Helen (Crystal Bernard), the former girl-next-door who now works the lunch counter and aspires to be a professional cello player; Lowell (Thomas Haden Church), the not-all-there mechanic; Roy (David Schramm), the owner of the rival airline AeroMass; and Fay, who handles Sandpiper's front desk. 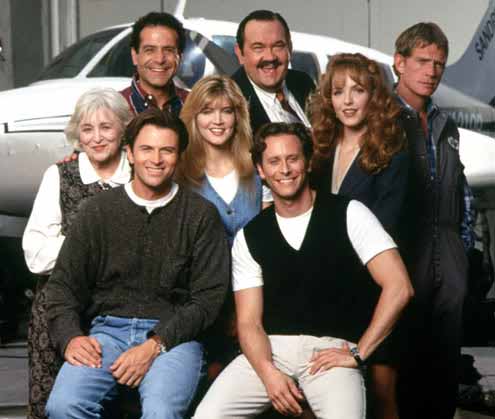 Over the short (six episodes) first season, Joe and Brian develop romantic triangles over both Helen and Brian's ex-wife, Carol (Kim Johston Ulrich), and Brian tries to set up Joe with the island tramp (Megan Mullaly). In the second season, the romantic entanglements continue, Joe develops a health problem that keeps him from flying, and we meet the last major member of the cast, Italian cab driver Antonio Scarpacci (Tony Shalhoub). Guest stars include Cheers' George Wendt and John Ratzenberger, Abraham Benrubi (ER) as Roy's son, and David Ogden Stiers as a conductor whom Helen tries to impress. While much of the regular cast faded from view after Wings, Shalhoub and Church garnered critical acclaim for their work on Monk and Sideways, respectively.

{videobox}/media/video/wings.mp4{/videobox}
The theme was a short version of a Franz Schubert piece, Piano sonata No. 20 in A Major, D. 959, IV. Rondo. Allegretto. Schubert received screen credit as the theme composer in every episode.

There were only two airlines at the Nantucket airport. The one owned by Joe Hackett was called "Sandpiper Air" the other one was "AeroMass" owned by Roy Biggins.

Brian and Joe Hackett had been living separate lives for years. They were brought back together in the first Wings TV show episode by a series of notes left by their deceased father. He had set them up with a kind of "Treasure Hunt" where, if they followed directions from note to note, they would find their inheritance (supposedly a fortune). They didn't find anything until the final episode of Wings when another note turned up. This one ultimately led to them finding $250,000 in an airport locker. They ended out using the money to send Helen to Vienna, Austria to study the Cello!

During its first four seasons, the Wings TV show aired immediately following Cheers on NBC and there were some similarities between the two shows. The producers were the same for both Cheers and Wings. The cast on Wings congregated on a regular basis in the waiting area and at the lunch counter at the airport. The cast on Cheers did the same at the bar.

There is a Tom Nevers Field on Nantucket, but it's not the airport, it's a sports complex. The airport on Nantucket is Nantucket Memorial Airport.

The Club Car, which was often featured on the show, is a real restaurant on Nantucket.

The license number of Sandpiper's plane, N121-PP, always used the call sign "Cessna Nevada 1-2-1 Papa Papa" when referred to on the radio.