ABC
Added to the database on September 17, 2008
Rate
(13 votes)
Cast & Characters | Broadcast History | Theme Song | DVDs | Watch Episodes | Photos | Trivia | Comments
The Odd Couple is a sitcom that aired on ABC from 1970 until 1975 that starred Tony Randall as Felix Unger and Jack Klugman as Oscar Madison, based upon the play of the same name, which was written by Neil Simon. Felix and Oscar are two divorced men. Felix is a neat freak while Oscar is sloppy and casual. They share a Manhattan apartment, and their different lifestyles inevitably lead to conflicts and laughs.
Jack Klugman and Tony Randall give an advanced course in chemistry in the auspicious first season of The Odd Couple, which would only get better as the veteran character actors made themselves at home in their signature roles and the series switched from a laugh track to a live audience. In these first episodes, The Odd Couple hews pretty much to the voice and spirit of Neil Simon's play about mismatched roommates, sloppy sportswriter Oscar Madison and "miserable, picky, irritating" photographer Felix Unger ("That was the point," defends series executive producer and writer Garry Marshall, who provides lively audio introductions for each episode and commentary for the pilot). Playing pivotal roles this first season are Felix and Oscar's poker playing buddies, Murray the cop (Al Molinaro), Vinnie, Roy, and Speed, the fabulous Pigeon sisters (Monica Evans and Carole Shelley reprising their Broadway and film roles), and, of course, Neil Hefti's jaunty, jazzy theme, which was introduced in the 1968 film. As with M*A*S*H, the series would establish its own identity and supplant previous incarnations in the public's consciousness. The Odd Couple was never a ratings smash before it became a syndication staple. 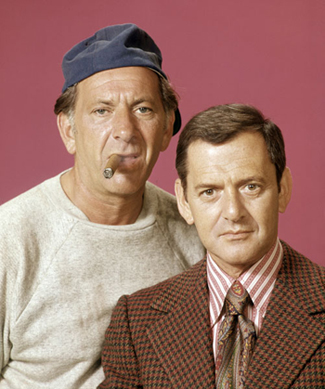 The Odd Couple on DVD

The Odd Couple TV show was based upon a hit Broadway play written by Neil Simon. There was also an Odd Couple theatrical movie in 1968 which starred Walter Matthau and Jack Lemmon.

In the first season the Odd Couple was produced in the same apartment that was used in the movie. It was shot with just one camera and incorporated a laugh track. That all changed in season two when the filming moved to a studio with the standard three cameras and a live audience providing the laughs.

For the first few episodes, the series title was "Neil Simon's The Odd Couple". Neil was upset about that because it erroneously gave the impression that he was the script writer for the TV series. The title was shortened to "The Odd Couple" but Neil continued to receive credit as the writer of the play. After a couple of seasons, Neil came to like the TV version and even appeared as himself on one episode!

Monty Hall who is perhaps best known as the host of the hit game show, "Let's Make A Deal", appeared on the Odd Couple. While he played himself, his appearance was explained by the writers having him be the old college roommate of Oscar Madison.

Felix's father was an optometrist and one of his patients was Oscar's father. Felix's kids on the show were neame Edna and Leonard. Tony Randall's real-life sister was named Edna and Tony's real first name was Leonard.

Blanche Madison was Oscar's ex-wife and was played by Brett Somers who was Jack Klugman's wife in real life! Unfortunately, real life followed fantasy because Jack and Brett broke up during the Odd Couple's time on the air!

Tony Randall won an Emmy Award for his role as Felix Unger after the Odd Couple had ended. Perhaps he was experiencing being "typecast" as many actors do after a long-run TV series. As he was accepting the Emmy he said that he wished he had a job!

Typecasting certainly didn't seem to hurt Jack Klugman's career! Within nineteen months after the final episode of the Odd Couple aired, Jack appeared in a TV movie as a medical examiner named "Doctor Quincy". After three more TV movies, the "Quincy, M.E." became its own weekly TV series that aired for another 144 episodes! Jack also starred in a two season series titled, "You Again?" just a few years after Quincy, M.E. ended.

The Odd Couple writers just couldn't get it straight when trying to explain how Felix and Oscar had met. The opening narration stated that they were friends as kids. Then, on several episodes, it was said that they met in the Army! One of the episodes inferred that they had served on a jury together for a sensationalized murder trial! That was a reference to the 1957 film, "12 Angry Men" where Jack Klugman played the role as a juror. So take your pick as to how they met. At least they did remove the reference to meeting as kids from the opening narrative in the third season.

In another goof, on one episode Felix and Oscar's address is mentioned as "74th Street and Central Park West". Then on another episode, it's stated as "1049 Park Avenue"!

There were two actors who made the transition from the 1968 movie to the TV series. Monica Evans and Carole Shelley played the "Pigeon Sisters" in both but only stayed for the first season of the TV show.

The Odd Couple's time slot was changed five times during its five season run. It was fortunate in that it didn't find itself competing with any real hit series on the other networks until its final season when CBS aired "The Waltons" in its slot!