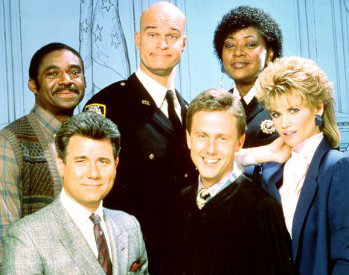 In between cases involving ladies of the evening, a derelict who thinks he's Santa, and sparring spouses, the court staff spends most of their spare time trying to figure out the judge's age and background, making jokes about Bull's imposing appearance, or, in Dan's case, propositioning any woman who comes along. Among the first-season guest stars, Michael J. Fox takes a break from Family Ties to play a young tough, while Soviet comedian Yakov Smirnoff (there's a flashback for you!) plays a Russian who threatens to blow up the court. Created by Rheinhold Weege (who co-produced and wrote for Barney Miller), Night Court took off in later years, as the cast solidified with court clerk Mac (Charles Robinson), sexy public defender Christine (Markie Post), and glib bailiff Roz (Marsha Warfield). With better people to bounce off of, Laroquette took home four consecutive Supporting Actor Emmys beginning with the second season. Those were the only major statuettes the series won during its nine-season run, but it did hold down the 9:30 slot of NBC's "must see" Thursday lineup between Cheers and L.A. Law.