NBC
Added to the database on October 8, 2008
Rate
(8 votes)
Cast & Characters | Broadcast History | Theme Song | DVDs | Watch Episodes | Photos | Trivia | Comments
My Two Dads is a sitcom that aired on NBC from 1987 to 1990 and starred Staci Keanan, Paul Reiser and Greg Evigan about a two men who could have been the father of the main character Nicole.
My Two Dads began airing in the fall of 1987 on NBC Sunday nights at 8pm. The sitcom starred Greg Evigan, who had previous fame from the TV series B.J. and the Bear and Paul Reiser, who later starred in the acclaimed TV comedy, Mad About You. The two played lifelong friends, Joey Harris and Michael Taylor respectively. Rounding out the star cast ensemble was newcomer Staci Keanan in her first ever starring role playing Nicole Bradford, the possible daughter of one of the dads. The show begins when Marcy Bradford (Emma Samms), the mother of Nicole Bradford (Keanan), dies. The two men who had competed for the woman's affections before Nicole was born — Michael Taylor (Reiser) and Joey Harris (Evigan) — are awarded joint custody of Nicole. The mix-ups of two single men raising a teenage daughter provided the story each week. Judge Margaret W. Wilbur (Florence Stanley), a family court judge, would frequently visit the new family and served as Nicole's mentor. 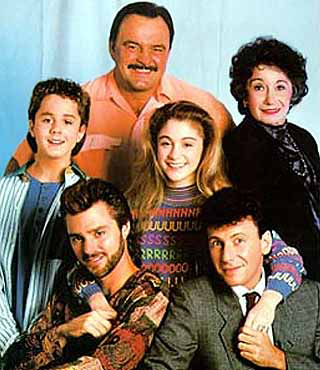 Nicole's actual paternity was never revealed on the show. However, in the episode "Pop, the Question", Michael and Joey — after they had a falling out — had a DNA test run to determine which of them was Nicole's biological father. However, the test was conducted against Nicole's wishes, so she destroyed the results before opening them since she was happier not knowing who the father was. Michael and Joey later resolve their differences and reconcile. Judge Wilbur looks at the results, but throws them away without revealing them to the audience.

{videobox}/media/video/mytwodads.mp4{/videobox}
"You Can Count On Me" written and performed by Greg Evigan.

My Two Dads on DVD

Nicole's two dads had very different lifestyles. Michael Taylor was a conservative "yuppie" type financial advisor and Joey Harris who was a liberal pop-artist. When Nicole and Michael moved in with Joey, those differences provided a lot of material for funny situations.

Paul Reiser would land the starring role on "Mad About You" less than 2 1/2 years after My Two Dads went off the air. By the end of Mad About You, both Reiser and his co-star Helen Hunt were earning one million dollars per episode!

Staci Keanan also went on to a starring role on "Step by Step" as did Chad Allen on "Dr. Quinn, Medicine Woman".

Dick Butkus is one of the few sports stars to successfully make a second career in show business. Dick had been a two time all American line backer at the University of Illinois. He played football for the Chicago Bears from 1965-1973. He was named "All-Pro Linebacker" a whopping seven times! He also played in eight Pro Bowls in a row ((1965-1972)! He has been inducted into the NFL "Football Hall of Fame". Many football fans consider Mr. Butkus to be the finest (and meanest) linebacker in football history!

Nicole's biological father's identity was never disclosed. There was one episode where Nicole briefly thought that she wanted to know so a DNA test was actually performed. When Nicole really thought it over, she decided that she didn't want to harm her relationship with either of her two dads and she threw them away without looking. Judge Margaret did look at the results but she never revealed them either. After that episode, many fans speculated that neither Michael or Joey was Nicole's father but there's no evidence of that.

My Two Dads won a People's Choice Award in 1988. Well, it actually tied for first place with "A Different World".

For those of you who never watched My Two Dads, you may remember Greg Evigan from his starring role on an earlier series titled, "B.J. and the Bear".