NBC
Added to the database on October 11, 2017
Rate
(5 votes)
Cast & Characters | Broadcast History | Theme Song | DVDs | Watch Episodes | Photos | Trivia | Comments
Las Vegas is an American comedy-drama television series which aired on NBC from 2003 to 2008. The show centres around a team of employees who work at the Montecito Resort and Casino in – you guessed it – Las Vegas. The team must handle every high a low, dangerous and mundane predicament that they encounter as they try to operate the various parts of Montecito.
In the fictitious Las Vegas resort and casino, the cast was met by famous faces, terrifying criminals, and hilarious occurrences within the team which kept the series chugging along for five solid seasons of hijinks in Sin City. 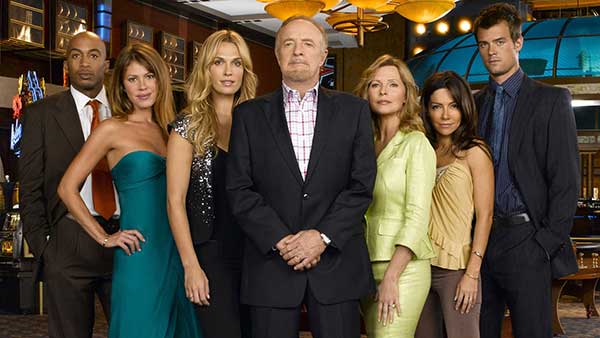 The series originally centred around Ed Deline (played by James Caan) as he made his way up from being the head of security at Montecito to being named the head of operations, watching him deal with the new responsibilities as he rose up the ladder as well as the major occurrences along the way. This was until part way through season four when Ed left after becoming a suspect in the murder of Mary Connell’s (Nikki Cox) father, forcing him to go into hiding. With Ed gone, his protégé, Danny McCoy (Josh Duhamel), stepped up to become the president of operations and Mike Cannon (James Lesure), who had worked as a valet and in the security department – both at Montecito – got promoted to head of security and surveillance. Among other key members of the team was Sam Marquez (Vanessa Marcil), the self-proclaimed best casino host in the world; Delinda Deline (Molly Sims) manages the entertainment, food and beverages; organising the special events was Mary Connell (Nikki Cox), and the one known as “The Ice Queen”, Nessa Holt (Marsha Thomason).

The excitement and character development were always rolling in Las Vegas. This was at a time before the internet really kicked off, and the land-based casino was still king – especially in Las Vegas. So, while in 2017 we can all enjoy the live casino experience from our Canadian homes, the time in which the series Las Vegas took place meant that the casino was the base of everything gambling, which resulted in a fair few peculiar characters entering.

The Montecito wasn’t always one of the safe casinos you'd find online in Canada nowadays, with problems spanning from the usual inter-staff relationships to major, heart-racing events like the big one towards the end of the very first season. In the episode "The Big Bang", we saw a customer sit in with a bomb strapped to their chest, with it later being discovered that there was yet another bomb in the building. But the biggest of all was the very last episode of the series, with it being cancelled unexpectedly – thus ending on a cliffhanger. While everyone was mourning the loss of owner A.J. Cooper (Tom Selleck) who had died in a plane crash, A.J. reappeared, which sent the pregnant Delinda Deline into shock, causing her to bleed. Sadly for fans, that’s where it ended, but thankfully Las Vegas brought us huge amounts of entertainment while it ran for five seasons.

Being set in a mighty resort and casino in Las Vegas, one would not be blamed for assuming that a fair few cameos were dropping into the show over its five seasons. The television saw many famous faces strut around the Montecito, such as The Black Eyed Peas, Snoop Dogg, Rihanna, Ne-Yo, Jon Bon Jovi, and Criss Angel.

But it wasn’t just cameos that the big stars were interested in, with many big names guest-starring in an episode or two, with the likes of Jean-Claude van Damme, Alec Baldwin, Sylvester Stallone, and Paris Hilton playing characters in the show. Well, apart from Van Damme, he played himself in Las Vegas.

Stars Josh Duhamel and Nikki Cox ended up marrying people who guest-starred on Las Vegas, with Duhamel wedding Fergie of The Black Eyed Peas – as if that needed saying – and Cox marrying Jay Mohr, who was in the episode "Whale of a Time".

In season one episode four of Heroes, entitled ‘Collision’, and episode five ‘Hiros’, Hiro Nakamura, Ando Masahashi, Niki Sanders, and Nathan Petrelli all stay at the Montecito – with Hiro and Ando subsequently being chucked out of the Montecito.
Tagged under:
Viewed 19729 times Last modified on July 14, 2018
back to top
« L.A. Law Lassie »