The King Of Queens

CBS
Added to the database on February 1, 2010
Rate
(11 votes)
Cast & Characters | Broadcast History | Theme Song | DVDs | Watch Episodes | Photos | Trivia | Comments
Doug Heffernan is just your ordinary deliveryman for the International Parcel Service, but his family is anything but normal. Along with his wife Carrie, Doug lives with Carrie's father Arthur (Seinfeld regular Jerry Stiller), who is a few cards short of a full deck. Arthur is known for his incoherent outbursts and misplaced anger. 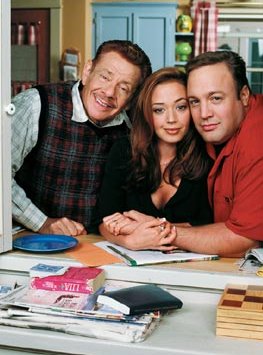 Doug and Carrie cling to their loving relationship to get them through, while trying to find privacy and peace in a house with an active senior citizen. In the first season, Doug and Carrie thought they had the solution when Arthur took a job at the local pizza place. But, their private time was short lived when Arthur lost the job after only one weekend. In the second season, they resigned themselves to the fact that Arthur was a permanent fixture in the basement and were not too concerned when a lack of heat brought him upstairs. That was until Arthur, of course, realized the comforts he was missing down in the cellar.

Fortunately, Doug and Carrie both have jobs to get them out of the house. And, although it may not provide them time together, it does give each of them the breathing room they need. Doug is always on the road in his parcel delivery van and Carrie's a world away in Manhattan where she works as a legal secretary. For balance, Doug turns to his three buddies, who each have their own unique perspective to share: Deacon, Doug's best friend, is levelheaded and the cool voice of reason when Doug gets upset. Spence, a toll-booth operator, finally has his own apartment and has moved out of his mother's house. Richie, a fire fighter.

While affable Doug is in the garage watching the latest sports with his buddies, Carrie, strong-willed and fairly opinionated, takes refuge in her female friendships - girls that give her that all-important female perspective, as well as a shoulder to lean on in a house, basement and garage full of men.

{videobox}/media/video/kingofqueens.mp4{/videobox}
"Baby All My Life I Will Be Driving Home To You" by Billy Vera


The King Of Queens on DVD


View all The King Of Queens DVDs, books, merchandise and collectibles from Amazon.com

The King of Queens Trivia

Leah Remini starred on three short-lived series before landing her role on the hit series, "The King of Queens"! In 1989 she appeared on "Living Dolls" for 12 episodes, in 1995 on "First Time Out" for 12 more, and in 1998 on "Fired Up" for 23 episodes. Just 7 months after "Fired Up" ended, Leah appeared on the first episode of "The King of Queens" and remained there for a whopping 207 episodes!

ABC had tried a series nearly identical to the King of Queens just six months befores the King of Queens premiered. It was titled, "That's Life" and was about a working class couple living in Queens who have a deadbeat sister (of the wife) and her son move in with them. Unfortunately, it only lasted five episodes.

The King of Queens TV show premiered with some fairly decent competition in its time slot on Mondays at 8:30PM. ABC was airing the second half-hour of "Monday Night Football", the WB (later becoming the CW) was broadcasting its hit drama series "7th Heaven", and FOX was showing the last half of "Melrose Place"!

When Doug Heffernan first met Carrie he was unemployed. Carrie insisted that she had no interest in any guy who didn't have a job so Doug lied to her about having a job as a package delivery guy. He would have Carrie drop him off at "work" and after she pulled away he'd take off and waste the day away. One day she didn't pull away and Doug had to open the employee entrance and go in! He started hanging out there and the supervisor came to believe that he actually worked there. He eventually begged his way in and that's how Doug got his job!

Jerry Stiller is the father of comedy movie star, Ben Stiller. Jerry and Ben's mom, "Anne Meara" were a very popular comedy team on television several decades before the King of Queens TV show hit the airwaves. Jerry and Anne both starred on "The Paul Lynde Show" in 1972! Jerry also appeared on the short-lived series, "The Tattingers" in 1988 and was one of just a few comedy stars who was "roasted" by the New York Fiars Clus on a "Comedy Central Presents" special! Anne Meara also starred on "Alf" and "Archie Bunker's Place".