CBS
Added to the database on December 15, 2009
Rate
(23 votes)
Cast & Characters | Broadcast History | Theme Song | DVDs | Watch Episodes | Photos | Trivia | Comments
Rawhide is a TV western that aired for eight seasons on CBS network from 1959 to 1965 that starred Eric Fleming and Clint Eastwood about adventures of cattle herders in the American West.
The hit Western series Rawhide is known for giving future star Clint Eastwood his start. The story revolves around a group of twenty riders looking after a herd of thousands. With so many head of cattle to look after, the riders often ran into trouble, including lack of water, anthrax, wolves, ghost riders, and of course, cattle rustlers. The show was popular for its exciting, often harsh adventures, set in the stunning scenery of the American West. 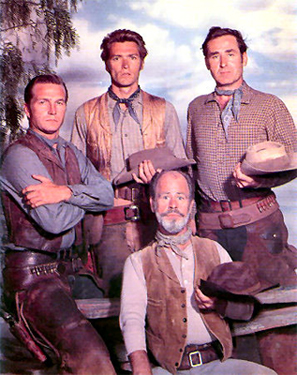 {videobox}/media/video/rawhide.mp4{/videobox}
Rawhide theme song's lyrics were written by Ned Washington in 1958. It was composed by Dimitri Tiomkin and sung by pop singer Frankie Laine.

Clint Eastwood got his first starring role as Rowdy Yates on Rawhide. While visiting a friend at CBS studios, a studio executive saw him and thought he looked like a cowboy. His first 3 big films "A Fistful Of Dollars", "For A Few Dollars More" and "The Good, The Bad, & the Ugly" were Spanish/Italian/German co-productions and, therefore, not originally produced in English. When those films came to the U.S., Eastwood insisted on dubbing his own voice tracks himself.

They must have let the Rawhide cast dress themselves or something because Eric Fleming (as Gil Favor) can be seen wearing jeans that are obviously Wranglers in several episodes. Nobody else, just Fleming! You can see the Wrangler rivets and the "W" on the pockets. Unfortunately, that doesn't conform with the time period of Rawhide as Wranglers weren't sold until 1947!

While Clint Eastwood got his first big break on the Rawhide TV show, he never again appeared in a role on television; not even as a guest star! He strictly played roles in movies thereafter. Clint had signed on to play one of the caped crusader's villains named, "Two-face" on the Batman TV show but it got cancelled before his episode came up.

Clint Eastwood was elected mayor of Carmel, California in 1986. Sixteen years later (2002) he was sworn in as the State of California's Park Commissioner. He showed the crowd his Commissioner's badge and said, "You're all under arrest".

Eric Fleming left Rawhide at the end of the seventh season and, therefore, so did trail boss Gil Favor. Clint Eastwood really got a chance to shine because his character, Rowdy Yates, took over as head man and organizing another cattle drive! Unfortunately that drive went to TV never neverland (well, at least it never ended) when Rawhide was removed from the CBS lineup in January of 1966. A totally different type of show about an animal reserve in Africa titled, "Daktari", took Rawhide's time slot and ran with it for 89 episodes over 4 seasons.