CBS
Added to the database on June 17, 1998
Rate
(16 votes)
Cast & Characters | Broadcast History | Theme Song | DVDs | Watch Episodes | Photos | Trivia | Comments
Green Acres is a sitcom starring Eddie Albert and Eva Gabor about a couple that moves from New York City to a country farm. Produced by Filmways as a sister show to Petticoat Junction, the series aired on CBS from 1965 until 1971. 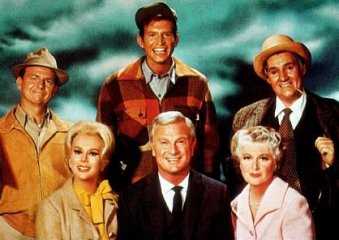 New York lawyer Oliver Wendell Douglas longs for a simpler way of life. So he buys a farm, sight unseen, and moves there to live off the land, much to the chagrin of his socialite wife, Lisa. The collision of small-town life and Lisa's sophisticated ways - she insists on wearing full-length gowns and ostentatious jewelry, even on the farm - provide much of the humor in the show.

Green acres is the place for me.
Farm livin' is the life for me.
Land spreadin' out so far and wide
Keep Manhattan, just give me that countryside.
New York is where I'd rather stay.
I get allergic smelling hay.
I just adore a penthouse view.
Dah-ling I love you but give me Park Avenue.
...The chores.
...The stores.
...Fresh air.
...Times Square
You are my wife.
Good bye, city life.
Green Acres we are there.
Watch opening intro:

Two to Four pigs were used on the TV show each year for "Arnold the Pig". The first one was male and all the others were female.

Eva Gabor was married 5 times and once said, "Marriage is too interesting an experiment to be tried only once."

Bea Benaderet had starring roles in several other TV shows including "The George Burns and Gracie Allen Show", "The Beverly Hillbillies", and "Petticoat Junction". She also starred as Mrs. Atterbury on the, "My Favorite Husband Radio Show" starring Lucille Ball. Lucille Ball actually wanted Bea to play the role of Ethel Mertz on her series, "I Love Lucy" but Bea couldn't do it due to her contract with the "George Burns and Gracie Allen Show". Unfortunately, Bea died during Green Acres' time on the air. They explained her disappearance by saying that she went off to visit her sister. In her final "appearance" her character was actually played by a "stand-in" that was only shown from the back and had no lines.

Everyone who watched Green Acres remembers Arnold the pig but there were many other named animals on the show. At one point or another during the show's run the Douglases had a cown named Eleanor, a duck named Drobney, and a dog named Mignon. Mr. Haney also had a dog named Cynthia who just happened to be in love with Arnold the Pig!

Eddie Albert was a circus trapeze flier before becoming a stage and radio actor.

The idea for this TV show was conceived from the 1950s radio program, "Granby's Green Acres" but the TV show is considered a "spin-off" of the series, "Petticoat Junction". Several of the Green Acres characters had appeared on Petticoat Junction before Green Acres ever aired. Both series took place in and near the same town. Characters from both series often showed up on the other series. There was also an exchanging of characters between Green Acres and "The Beverly Hillbillies".