ABC, CBS
Added to the database on December 16, 2009
Rate
(22 votes)
Cast & Characters | Broadcast History | Theme Song | DVDs | Watch Episodes | Photos | Trivia | Comments
Family Matters is a sitcom about a middle-class African-American family living in Chicago, Illinois, which aired for nine seasons. The series was a spin-off of Perfect Strangers, but revolves around the Winslow family. Midway through the first season, the show introduced the Winslows' nerdy neighbor Steve Urkel (played by Jaleel White), who quickly became its breakout character and eventually a main character. Family Matters aired from 1989 to 1997 on ABC and on CBS from September 1997 to July 1998.
A perfect spin-off from Perfect Strangers: Family Matters focused on Harriet Winslow (the elevator operator from the Chronicle) and her family of sorts. Carl Winslow, her husband, was a dutiful cop, and a gruff and lovable father to three kids: Eddie Winslow, the rebel son; Laura Winslow, the smart-aleck daughter; and cute little Judy Winslow. They had opened their home to Harriet's sister, Rachel Crawford and her little baby son Richie, and in the very first episode, Carl had to open his home to his cool and streetwise mother, Estelle Winslow, whether he wanted to or not.

Everything was going along just fine until one day, Steve Urkel, the inventive nerd, barged into their home and eventually, into their hearts. Steve had a killer crush on Laura, but she would never give him the time of day. Steve Urkel was intended to be a one-shot appearance, but his popularity with the fans won him the number-one spot as America's favorite nerd. 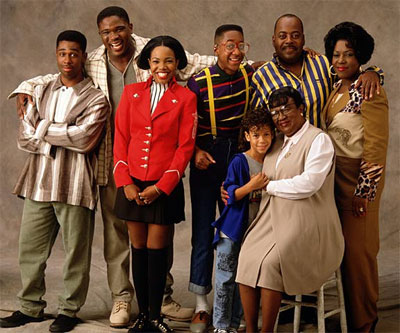 As the show went on, the characters and the stories evolved. Richie grew from a little baby into a rambunctious and impressionable little boy. The stories started revolving around Steve and his incredible inventions, which became the greatest sight gags on the show. In almost every episode, Steve ends up breaking furniture, windows, and Carl's patience. Eddie and Laura each had best buddies to hang out with: Eddie had dim-witted yet lovable Waldo Geraldo Faldo,and Laura had faithful and true-blue gal pal Maxine. The greatest mystery of Family Matters is Judy and Rachel's sudden disappearances from the show, but Rachel made guest appearances whenever possible.

To stop Steve from chasing her, Laura matched him up with perky-yet-pushy Myra Monkhouse. Steve loved Myra physically, but his emotions will always go to Laura. Eddie had his share of steady girlfriends, and even he had an Urkel chasing him- Myrtle May Urkel, Steve's cousin from Biloxi (Jaleel White also). Every so often, Steve uses one of his inventions to turn himself into debonair, irresistable lover Stefan Urquelle or karate hero Bruce Lee to draw Laura closer to him, much to Myra's chagrin.

At the end of season 6, the Winslows welcomed Steve into their home when Steve's family went to Russia. Pretty soon, Richie hung out with 3J, a tough, streetwise kid always running from the children's home. The Winslows then adopted 3J as one of their kids, as they did with Steve.

In the final season, Family Matters - along with Step by Step - moved to CBS, and Steve slowly matured from the annoying nerd that he used to be. This was when Laura started falling in love with Steve, and Myra got kicked to the curb, but she vowed to get her "Stevie-kins" back. Also, the original Harriette, JoMarie Peyton, had left the show in mid-season and Judyann Elder took her role. Steve and Laura got engaged, but they never had a wedding because CBS dropped the ax on the show. But, nevertheless, Family Matters had a great successful run and is one of the longest running African-American comedies ever.


« The Facts Of Life Family Ties »