3rd Rock From The Sun

NBC
Added to the database on October 12, 2009
Rate
(12 votes)
Cast & Characters | Broadcast History | Theme Song | DVDs | Watch Episodes | Photos | Trivia | Comments
3rd Rock from the Sun is an American sitcom that aired from 1996 to 2001 on NBC. The show is about four extraterrestrials who are on an expedition to Earth, which they consider to be a very insignificant planet. The extraterrestrials pose as a human family in order to observe the behavior of human beings.
In the sci-fi sitcom 3rd Rock from the Sun, John Lithgow plays Dick Solomon, the leader of an extraterrestrial team of explorers studying Earth culture. Dick and his crew assume human guises and pretend to be a typical family of four, but their behavior is anything but normal. Despite his erratic personality, Dick manages to hold down a job as a physics professor and keep a human girlfriend, Dr. Mary Albright (SNL veteran Jane Curtin). 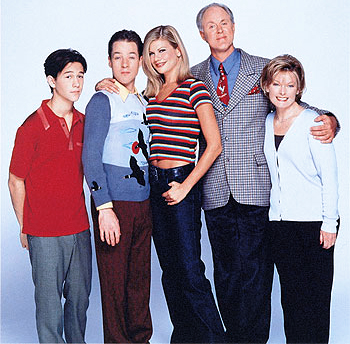 3rd Rock From The Sun on DVD


View all 3rd Rock From The Sun DVDs, books, merchandise and collectibles

3rd Rock From The Sun Trivia

In the first episode of 3rd Rock from the Sun where William Shatner appeared as the "Big Giant Head", he and John Lithgo (as Dick Solomon) both stated that they once had a frightening experience on an airplane. They were referring to the fact that both actors appeared in a Twilight Zone segment titled, "Nightmare At 20,000 Feet" where their characters saw a monster ripping apart their airplane. When they tried to show other passengers or the crew, the monster would hide. Eventually, they were carried off the plane to the mental ward! The ironic part is that Shatner appeared in the role on the original Twilight Zone TV show and Lithgow was in the 1983 Twilight Zone movie segment that was a nearly identical remake of Shatner's episode.

Some writer was showing off their sense of humor when they named the three top male characters' on 3rd Rock from the Sun: "Tom, Dick, and Harry"!

Did you notice that, occasionally, Dick Solomon would stop his crazy banter and start speaking very technically once in a while? In order to make it more believable that John Lithgow's character was actually from a more advanced alien civilization, Physicist Brian Greene wrote some scientifically authentic lines for Lithgow.

On one episode, the rest of the Solomons get upset with Dick when he allows Mary to "spend the night" too often. At one point, Sally said, "Last night she forced us to watch an A&E Biography on Susan Saint James!" That was a reference to the fact that Jane Curtain starred on the series, "Kate and Allie" with Susan Saint James!

Ian Lithgow played the role of "Leon" who was one of Dick Solomon's students. Ian is John Lithgow's real-life son!

NBC just couldn't leave 3rd Rock From The Sun's time-slot alone! They moved it one dozen times during its time on the air!