Added to the database on March 4, 2009
Rate
(5 votes)
Jabberjaw is a 30-minute Saturday morning animated series created by Joe Ruby and Ken Spears and produced by Hanna-Barbera and aired from September 11, 1976 to September 3, 1978 on ABC.
Per a great deal of Hanna-Barbera's output in the 1970s, the format and writing for Jabberjaw was similar to that for Scooby-Doo and Josie and the Pussycats. The show also drew inspiration (in the use of a shark as a character) from the overall shark mania of the 1970s because of the then-recent film Jaws. It also shared The Flintstones' penchant for making use of puns as the names of locations, people, etc., in this case, ocean-themed puns (such as "Aqualaska" instead of Alaska).

Jabberjaw is a great white shark who has the brain of a sardine and the courage of a guppy. He is also a drummer for The Neptunes, a rock group made up of four teenagers — Biff, Shelly, Bubbles and Clam-head — who live in an underwater civilization in the year 2076. Jabberjaw and The Neptunes travel to various underwater cities where they encounter and deal with diabolical villains who want to conquer the undersea world. 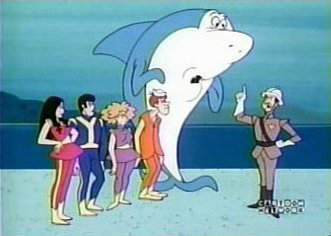 
« The Huckleberry Hound Show The Jetsons »