CBS
Added to the database on February 18, 2013
Rate
(15 votes)
Cast & Characters | Broadcast History | Theme Song | DVDs | Watch Episodes | Photos | Trivia | Comments
Mission: Impossible aired on CBS from September 1966 to March 1973 and chronicled the adventures of the Impossible Missions Force (IMF), a team of government spies and specialists who were offered "impossible missions" (should they decide to accept them) by the unseen "Secretary".
Although the cast varied over the years, the main characters included The Team Leader (Dan Briggs the first season, then Jim Phelps the other six), The Techno-Wizard (Barney Collier), The Strongman (Willy Armitage), The Master of Disguise (first Rollin Hand, then The Amazing Paris), and The Femme Fatale (Cinnamon Carter, Dana Lambert, Casey, Mimi Davis). The series is best known for its standard (but not invariable) opening mission contact (conducted by a pre-recorded message), the theme composed by Lalo Schifrin, the leader's selection of mission agents from a dossier, the opening briefing, the intricate use of disguises and a typical "mask pulloff" scene near the end of most episodes, and the relative lack of characterization of the characters. 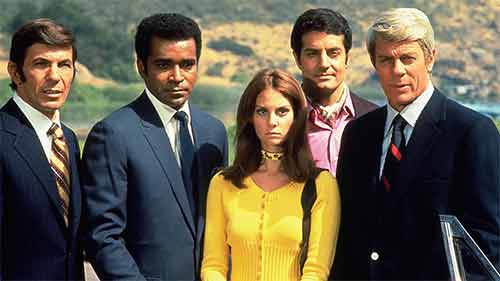 The series follows the exploits of the Impossible Missions Force (IMF), a small team of secret agents used for covert missions against dictators, evil organizations and (primarily in later episodes) crime lords. On occasion, the IMF also mounts unsanctioned, private missions on behalf of its members.

The identities of the organization that oversees the IMF and the government it works for are never revealed. Only rare cryptic bits of information are ever provided during the life of the series, such as in the third season mission "Nicole", where the IMF leader states that his instructions come from "Division Seven". In the 1980s revival, it is suggested the IMF is an independent agency (as the FBI can only legally operate within the United States and the CIA can only operate outside the country). In the first motion picture, unlike the TV show, the IMF is depicted as part of the CIA.

Martin Landau was not originally hired as a regular cast member. He was a guest star in Mission Impossible's pilot episode and his character was so popular that he appeared (still as a guest star) in most of the first season's episodes. He was hired as a regular (under contract) for the 2nd and 3rd seasons, but he had a dispute with Paramount Studios over the 4th season contract and left the show. Leonard Nimoy was brought in as the new "Master of Disguise" for the TV show. This was great for him as the Star Trek series, where he played "Mr. Spock", had just ended production. Nimoy became unhappy with his parts and left at the end of the fifth season. He was not replaced.

The opening segment always included the tape-recorded mission objectives and went as follows: Your mission, Jim, should you decide to accept it ...... (Then came the details of each mission) ..... As always, should you or any member of your I.M. Force be caught or killed, the secretary will disavow any knowledge of your actions. This tape will self destruct in five seconds.

Peter Graves is the brother of James Arness (Marshall Matt Dillon on the series, "Gunsmoke").

Barbara Bain was married to fellow cast member Martin Landau (till 1993). She was also the first actress to win three Emmys in a row (1967, 68 and 69) for her role on Mission Impossible. Two years after this series ended, Martin and Barbara also worked together on the series, "Space 1999".

CBS Studios originally rejected Mission Impossible. Fortunately, Lucille Ball decided to produce it at Desilu Studios and eventually got it on the air at CBS. Lucy was a little concerned about the complicated plot-lines. Would the viewers sit "glued to their tvs" for an entire hour to keep track of what was going on? That actually turned out to be a "plus" for Mission Impossible! Viewers wouldn't channel surf for fear of missing even a few seconds of the show. That resulted in commercials being watched and increased advertising revenues!