CBS
Added to the database on September 8, 2008
Rate
(14 votes)
Cast & Characters | Broadcast History | Theme Song | DVDs | Watch Episodes | Photos | Trivia | Comments
The Dick Van Dyke Show is a sitcom that aired on CBS from 1961 until 1966 that starred Dick Van Dyke and Mary Tyler Moore. It was produced by Carl Reiner with Bill Persky and Sam Denoff. The music for the show's theme song was written by Earle Hagen.
The comedic chemistry of The Dick Van Dyke Show is legendary. Dick Van Dyke and Mary Tyler Moore's collaboration created one of the funniest couples in TV history. They were backed up by Morey Amsterdam (human joke machine Maurice) and Rose Marie (the sharp-tongued, husband hunting Sally). The Dick Van Dyke Show was based on producer Carl Reiner's experiences working for Sid Caesar's Your Show of Shows, lending this classic sit-com an uproarious, authentic atmosphere. 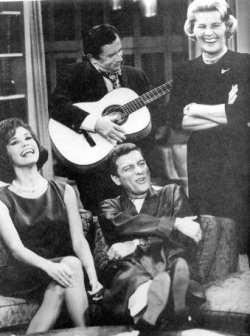 {videobox}/media/video/dickvandykeshow.mp4{/videobox}
Theme by Nelson Riddle and his Orchestra

You may remember Carl Reiner as the egotistical star of the ficticious Alan Brady Show. Actually, Carl was also the creator, producer and director for the series. He also wrote many of the episode scripts. Carl's premise for the series was his years as a writer for the legendary "Your Show Of Shows" starring Sid Caesar and Imogene Coca. For the first several seasons, Carl never appeared on screen as Alan Brady although his voice was heard occasionally.

Carl Reiner also played the part of Rob Petrie in the series' pilot! We all know that Dick Van Dyke was chosen for the part on the series but did you know that Johnny Carson was the second choice for the role?

The role of Laura Petrie was a little harder to cast. More than 60 actresses were auditioned before Mary Tyler Moore was selected! Mary's first on screen appearance was as "Happy Hotpoint" an elf in the Hotpoint appliance commercials that appeared on the "Adventures of Ozzie and Harriet (1952)".

Richard Deacon was one of few actors to have a supporting role on two series at the same time. In addition to his Dick Van Dyke Show role as Mel Cooley, he also played the part of Fred Rutherford on "Leave It To Beaver (1957)".

The Dick Van Dyke Show was not cancelled and was still very popular when it left the air in 1966. Several of the cast members including Dick Van Dyke simply decided that it was time to move on to new projects.

Calvada Productions produced the Dick Van Dyke Show. The name was a conglomeration of the names of the major contributors to the production phase of the series; Ca rl Reiner, Sheldon L eonard, Dick Va n Dyke and Da nny Thomas.

The first episode of the series began filming on January 20, 1961. John F. Kennedy was sworn in as President of the United States on that same day. vThis series was actually cancelled after the first season! There are two rumors as to why CBS changed their minds. First, producer Sheldon Leonard somehow convinced CBS renew it. Second, Proctor and Gamble threatened to cancel all of their daytime soap opera advertising if the show didn't continue. No one has ever verified the facts.

Jerry Van Dyke, best known from his role on the series, "Coach (1989)", is Dick Van Dyke's brother in real life and occasionally appeared as his onscreen brother Stacey Petrie.