ABC
Added to the database on October 18, 1999
Rate
(20 votes)
Cast & Characters | Broadcast History | Theme Song | DVDs | Watch Episodes | Photos | Trivia | Comments
The Adventures of Ozzie and Harriet is a sitcom that aired on ABC from 1952 until 1966 starring the real life Nelson family. After a long run on radio, the show was brought to television where it continued its success, running on both radio and TV for a couple of years. The series attracted large audiences, and although it was never a top-ten hit, it became synonymous with the 1950s ideal American family life. It is the longest-running live-action sitcom in US TV history. 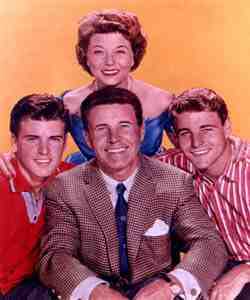 The series starred Ozzie Nelson and his wife, singer Harriet Nelson, and their young sons, David Nelson and Eric Nelson, better known as Ricky. The show was the real-life Nelson family on the air, with all the little adventures that an active middle-class American family might have, and two young boys growing up before their parents' and the television audience's eyes.The Nelsons lived in Hillsdale at 822 Sycamore Road. On TV Ozzie had no defined source of income, and always seemed to be hanging around the house.

In the early episodes the stories revolved mainly around the four Nelsons, with only a few friends and neighbors, most notably Thorny Thornberry, who regularly offered Ozzie bits of ill-timed advice. Later, as the boys began to date, a succession of girlfriends began to appear. In time both David and Ricky were married, and both real-life wives (June and Kris) appeared on the show.

Buy The Adventures of Ozzie & Harriet On DVD

This show is currently unavailable to stream episodes online.

The Adventures of Ozzie & Harriet Shop

The Adventures of Ozzie and Harriet Trivia

The Nelsons' home on television was modeled after their actual home in Hollywood.

Like many other family comedies, Ozzie's (the father's) occupation was never clearly defined. In the episode #160, "Rick, The Drummer", however, it was stated that Ozzie had at one time been an orchestra leader with his wife Harriet as the vocalist. That was actually also true during the 1930s in their real lives.

Before the TV show, there was an Adventures of Ozzie & Harriet radio show that aired from October 8, 1944 through June 8, 1954!. The radio and television programs were on the air simultaneously for two of those years! The boys were portrayed by professional actors in the beginning but were replaced by real life Ricky and David in 1949.

In the mid 1950s, Ricky Nelson had a very successful music career which also boosted the ratings of the TV show dramatically. All of his songs were either included during an episode or he would sing at the end of an episode.

For a very short time in 1960, the title of the series was changed to, "The Adventures of the Nelson Family".

When eventually both David and Ricky got married, their new brides joined the show.

In 1973 Ozzie and Harriet appeared on another short-lived TV show titled, "Ozzie's Girls" which appeared in syndication. The Nelsons took in two college girls as boarders in their home. The main plot-lines on the series were the differences involved in dealing with "daughters" rather than sons.

One of the sponsors for the series was the "Hotpoint Appliances" company. Some of their commercials featured an elf named "Happy Hotpoint". A very pretty young woman played the part of "Happy Hotpoint". In fact, it was her first role onscreen. Her name was "Mary Tyler Moore" who would later star on the "Dick Van Dyke Show (1961)" and "The Mary Tyler Moore Show (1970)"!

The final episode of the series, "Ozzie's Game Room", dealt with the feelings that parents experience when there last child has left their home. Ozzie decided to remodel Ricky and David's room into a game room with a pool table but Harriet wouldn't hear of it. She wanted to leave it as their bedroom in some subconscious desire for them to never leave.