FOX
Added to the database on May 21, 2012
Rate
(3 votes)
Cast & Characters | Broadcast History | Theme Song | DVDs | Watch Episodes | Photos | Trivia | Comments
House is a medical drama that aired on the FOX from 2004 to 2012 about Dr. Gregory House, an unconventional and misanthropic medical genius who heads a team of diagnosticians at the fictional Princeton-Plainsboro Teaching Hospital in New Jersey. 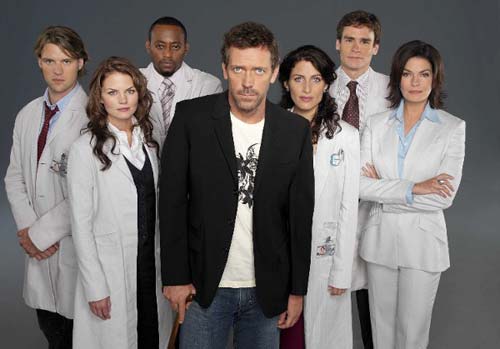 He pops pills, watches soaps, and always, always says what's on his mind. He's Dr. Gregory House (Emmy nominee Hugh Laurie). Producers David Shore, Bryan Singer, Katie Jacobs, and Paul Attanasio haven't rewritten the hospital drama--at heart, it's a cross between St. Elsewhere, ER, and C.S.I.--but they've infused a moribund genre with new life and created one of TV's most compelling characters. More than any previous medical procedural, it resembles Attanasio’s underrated Gideon's Crossing, but House is lighter on its feet. As fascinating as he is, the show wouldn't work as well if it were all House all the time (that would be like Sherlock Holmes without Watson or Moriarty). Fortunately, he's joined by an intriguing cast of characters, portrayed by a combination of experienced vets (Omar Epps, Lisa Edelstein, Tony winner Robert Sean Leonard) and new faces (Jennifer Morrison, Jesse Spencer). Aside from the complicated cases they tackle each week, the sparks really fly when House's brilliant, if naïve charges are put to the test--and as the head of a teaching hospital, it's his job to test them (although his tough love approach is constantly landing him in hot water with Edelstein's administrator).


View all House DVDs, books, merchandise and collectibles from Amazon.com

Hugh Laurie's real-life dad actually was a doctor. Hugh has said that he feels a bit guilty for "being paid more to become a fake version of my own father"! I think that we can all agree that Hugh is paid for his excellence as an actor who portrays a doctor and not as a fake version of his father! In 2008 House, M.D. was seen by more viewers worldwide than any other TV show. It aired in sixty-six nations!

Hugh Laurie's audition for his role on House, M.D. was filmed in the bathroom of his hotel in Namibia where he was staying while shooting the 2004 movie, "Flight of the Phoenix". Hugh said that they filmed it there because it was the only place they could find with enough light!

During early production the series was titled, "Chasing Zebras, Circling the Drain". The title was derived from the fact that zebra is a medical slang term for an uncommon diagnosis and circling the drain refers to patients that are considered terminal.

In a July 31, 2006 appearance on "Inside the Actors Studio", Hugh Laurie stated that the first time he read a script for House he thought that Doctor James Wilson was the lead character. When he learned that Doctor Gregory House was the lead he found it difficult to believe that the series could center around such a man!

Ten percent of the world's population is left-handed but out of the six original members of the House, M.D. cast Doctors Cuddy, Foreman and Wilson are all lefties!

Doctor House was not the first TV Doctor to voice his catchphrase, "Everybody Lies". On the January 9, 2003 episode of "Scrubs" Doctor Bob Kelso voiced the phrase.