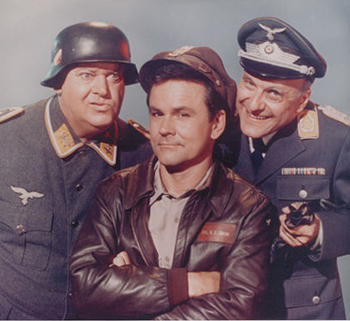 In the mid 1950s, Bob Crane had the #1 radio show in Los Angeles, CA. He interviewed such stars as Marilyn Monroe, Frank Sinatra, Bob Hope, and Mary Tyler Moore.

Richard Dawson (Newkirk) went on to host the Family Feud TV show, one of the most successfull games shows of all time!

Werner Klemperer and John Banner who played the German soldiers Klink and Schultz on Hogan's Heroes, were, in fact, both Jewish. Werner Klemperer fled Nazi Germany and served in the U.S. military during World War II. John Banner spent time in a concentration camp, but was released and fled the country. Robert Clary (LeBeau) also spent years in a concentration camp as a child.

Hogan's Heroes was nominated for 5 emmys and won 2.

Bob Crane was found murdered in a Scottsdale, Arizona motel room in 1978. The murder was never solved.

Larry Hovis (Carter) also had regular cast roles on "Gomer Pyle, U.S.M.C." and on the "Rowan and Martin's Laugh-In".