The Facts Of Life

NBC
Added to the database on September 29, 2008
Rate
(29 votes)
Cast & Characters | Broadcast History | Theme Song | DVDs | Watch Episodes | Photos | Trivia | Comments
A spin-off of the sitcom Diff'rent Strokes, The Facts of Life is a sitcom that aired on NBC from 1979 to 1988 and focused on Edna Garrett (Charlotte Rae) as she becomes housemother at the fictional Eastland School, an all-female boarding school in Peekskill, New York.
Before Degrassi Junior High and Seventh Heaven, there was The Facts of Life--a feel-good sitcom where a lesson was learned at the end of each episode. Set in an all-girl boarding school, the series spanned nine seasons, countless hairdos, and an array of cast members and guest stars--some of whom (George Clooney, Helen Hunt, Molly Ringwald) would become very, very famous in the future. Tseries introduces TV viewers to characters that represent girls everyone knows--Blair, the rich, spoiled girl; Natalie, the chubby smart aleck; Jo, the rebellious tomboy; and Tootie, the rollerskating tattletale. 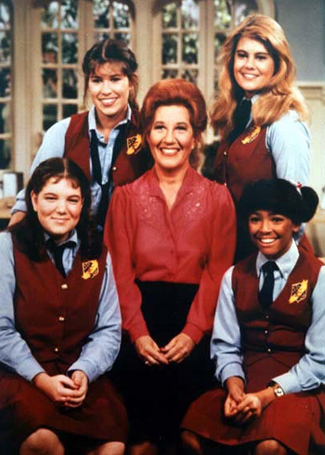 A spin-off of Diff'rent Strokes, The Facts of Life was designed as a showcase for Charlotte Rae, who played jack-of-all-trades den mother Edna Garrett. But the show's central plots all revolved around the girls. Back in 1979, certain words weren't common on television. So when Blair tries to make a schoolmate feel bad, insinuating that the girl is a lesbian, she uses the word "strange" instead of the "L" word. The series is a coming-of-age story that plays to its target audience of teenage girls. While much of the humor isn't very sophisticated, the homespun messages the show spread are right on target, whether it's dealing with eating disorders, sexual promiscuity, or acknowledging that handicapped people are people, too. From 1979 to 1988, the girls would grow into young women who go to college, get jobs, and lose their virginity (not necessarily in that order).

Buy The Facts Of Life on DVD


View all Facts Of Life DVDs, books, merchandise and collectibles from Amazon.com

Watch The Facts of Life Episodes

The Facts of Life TV show was a "spin-off" of the 1978 series, "Diff'rent Strokes". On that series, Charlotte Rae played the role of the Drummond's housekeeper.

Cloris Leachman was the first actress to wim five Emmy Awards all in different categories. She won the title of "Miss Chicago" in the 1946 Miss America competition. She is perhaps best known for her role of "Phyllis Lyndstrom" on the "Mary Tyler Moore Show (1970)". That series also "spin-off series" of its own titled, "Phyllis" 0n which Cloris starred for two seasons.

The Facts Of Life was the longest running TV show with an all female main cast.

Charlotte Rae's nickname is "Maude". She starred in the original run of the Broadway musical, "Lil' Abner" in the role of "Mammy Yokum.

Kim Fields was only 9 years old when she portrayed "Tootie" (who was supposed to be 12 years old) on the series. In order to make her appear older, during the first season of the Facts Of Life, she wore roller skates to increase her height on camera.

Actor Alan Thicke wrote the theme song for the Facts of Life and "Diff'rent Strokes" but not for his own series, "Growing Pains".

Lisa Whelchel got her big break when she was selected to be a "Mouseketeer" on the "Mickey Mouse Club" TV show. She sponsored several Mouseketeer reunions for former cast members. Her daughter appeared as an extra on the "Facts of Life Reunion" TV movie that aired on ABC in 2001.

Kim Fields was the first female, minority child star. She is also a graduate of Pepperdine University with a degree in communications.

Nancy McKeon got her start in show business at the age of two by modelling baby clothes in the Sears catalog. She and her brother did more than 65 commercials! She decided to not take part in the Facts of Life reunion movie. Like many others, she felt that reunion shows just don't live up to one's memories of the series and since she won't watch such TV shows, she wouldn't appear in one either.