Saved By The Bell

NBC, Syndication
Added to the database on October 13, 2008
Rate
(7 votes)
Cast & Characters | Broadcast History | Theme Song | DVDs | Watch Episodes | Photos | Trivia | Comments
Saved by the Bell is a popular 1990s sitcom that aired between 1989 and 1993. The series is a retooled version of the 1988 series Good Morning, Miss Bliss, which was itself later folded into the history of Saved by the Bell. The series followed the exploits of several students along with their principal at fictional Bayside High School.
As high school comedies for young viewers go, Saved by the Bell is as light as they come, yet there is something unusually addictive about it. No doubt that's because the series, set at Bayside High School in Pacific Palisades, California, balances fluffy stories with evolving relationships. It's no chore to watch every episode and feel satisfied with the touching, admirable growth and affection between key characters. 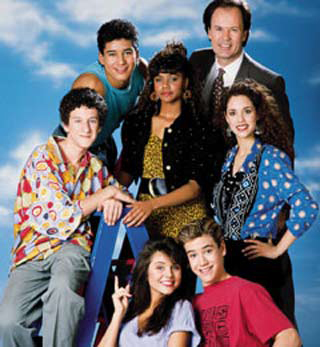 The show concerns teenager Zack Morris (Mark Paul Gosselaar) and his eclectic group of friends. Zack himself is a complicated fellow: he's a vain hound for the girls and a screw-up who sets attendance records for detention. But as the series progresses, he also demonstrates that he's a thoughtful kid, underneath it all, with insight and loyalty to others. Tiffani-Amber Thiessen plays Kelly Kapowski, a cheerleader and mall rat who gains seriousness of purpose and dignity over time, and who ends a rivalry between Zack and good-natured sexist jock A.C. Slater (Mario Lopez) by choosing the former--after he cleans up his act a bit. Jessie Murtle Spano (Elizabeth Berkley) may be the most interesting character: smart and given to alternative-lifestyle values, an unabashed feminist yet self-conscious about her height. (She towers over most boys interested in her). Samuel "Screech" Powers (Dustin Diamond) is the show's token nerd, but he defies the stereotype in many ways: In "Dancing to the Max," Kelly develops a crush on Screech after he tutors her in science, while in other episodes he wins a beauty contest and comes to the heroic aid of a chum more than once. What's nice about Saved by the Bell is the way these sundry friends all get to know and accept each other, creating unexpected bonds and encouraging honest support when the chips are down.

The show began as a series named Good Morning, Miss Bliss, a short-lived series on the Disney Channel that focused on Miss Bliss and the students at John F. Kennedy Junior High School in Indianapolis, Indiana.

Saved By The Bell On DVD

View all Saved By The Bell DVDs, books, merchandise & collectibles from Amazon.com

Saved By The Bell Image Gallery

Saved by the Bell Trivia

Saved by the Bell was a "spin-off" of a series titled, "Good Morning, Miss Bliss," which takes place at John F. Kennedy Junior High School, in Indiana. Then, when the students advance to Bayside High School in "Saved By The Bell" not only does Mr. Belding go with them, but they are somehow mysteriously in Los Angeles, California. In the episode, "Schreech's Spaghetti Sauce", Screech and the gang nearly get sued for selling spaghetti sauce that Screech got the recipe for out of the "Betsy" Crocker cookbook.

Mark-Paul Gosselaar has an interesting ancestry. His father was Dutch and his mother was Indonesian. He actually speaks fluent Dutch. He met his wife "Lisa Ann Russell" on this series.

Mario López's first professional role was on the series, "a.k.a. Pablo (1984)". Since "Saved By The Bell: College Years" ended, Mario has excelled as a TV host on such shows as, "Name Your Adventure" (1993), "Other Half, The" (2001) and "Pet Star" (2003). He was on his high school wrestling team but, contrary to popular belief, was not a state champion. He won 2nd place in the state of California in 1990. Texans linebacker "Kailee Wong" is married to his younger sister Marissa.

When Dustin Diamond first started portraying "Screech" on the series, "Good Morning, Miss Bliss (1987)", his character on the show was in the eighth grade while Dustin was, in real life, only in the fifth grade. He is left-handed and is "into" chess and computers. He once worked as a live Maniquin at a store.

Tiffani-Amber Thiessen won the title of "Miss Junior America" in 1987 and then two years later she was starring as Kelly Kapowski on "Saved By The Bell". She went from there to her role on Beverly Hills 90210 but stopped along the way for some breast implants. After all, she had to look good in those "birthday suit" photos she did for "Veronica" and "New Look" magazines!

On this series, the students attended Bayside High School in Palisades, California.

Dennis Haskins started his career in show business as an agent and concert promoter. He actually represented Tom Jones and Greg Allman! He also wrote a book for actors titled, "Rating the Agents". He appeared in guest roles on numerous TV series during the eighties and once before gaining celebrity, he appeared as a contestant on the TV game show, "Scrabble". He went on to appear on the "spin-off" of this series titled, "Saved By The Bell: The New Class (1993)" and he had also starred on the series preceding this one, "Good Morning Miss Bliss (1987)".

Lark Voorhies also appeared on the series, "Good Morning Miss Bliss (1987)". She also starred on the daytime dramas, "Days of Our Lives" and "The Bold and the Beautiful". She has also done TV commercials and appeared in many music videos. Her mother named her "Lark" after a character she saw in the movie, "Cool Breeze (1972)" when she was only 14 years old.

Elizabeth Berkley enrolled at the Detroit Dance Company at the young age of five and took part in several ballets. She originally auditioned for the role of Kelly Kapowski on "Saved By The Bell" but lost the role to Tiffani-Amber Thiessen. The producers liked Elizabeth so much, however, that they created the role of Jessica Spano to give her a spot on the series. Since leaving the series, she has appeared in several movies including "Showgirls" which disappointed some of her fans because she played the role of a stripper. She has stated that she sometimes has felt like the woman wearing the "Scarlett Letter" since doing that film. And, surprisingly, she only received $100,000 in salary for her role in the movie! Elizabeth once said that she sat on an airplane next to a guy watching "Showgirls" and he never even recognized her! She also earned a degree from UCLA in English Literature! She is a vegetarian and has two differently colored eyes! Her right eye is half-green, half-brown and her left one is all green.