CBS
Added to the database on October 13, 2008
Rate
(9 votes)
Cast & Characters | Broadcast History | Theme Song | DVDs | Watch Episodes | Photos | Trivia | Comments
Murphy Brown is a sitcom that aired on CBS from 1988 until 1998 that starred Candice Bergen as the eponymous Murphy Brown, a famous investigative journalist and news anchor for FYI, a fictional CBS television newsmagazine.
There had never been anyone on primetime quite like Murphy, the star investigative reporter for the Washington, D.C.-based television news magazine F.Y.I. As created by Diane English and embodied by Candice Bergen, Murphy was, in English's words, "Mike Wallace in a dress." On camera, she was tough, smart, and relentless. Off camera she was intriguingly flawed. In the pilot episode, her character returns to work following a stay at the Betty Ford Clinic. Over the course of the season, her sobriety is supremely tested by the chaotic goings-on inside the funniest newsroom since WJM on The Mary Tyler Moore Show. Murphy must contend with an unending parade of ill-suited, stressed-out secretaries (a running joke throughout the series' 10 years), new 25-year-old producer Miles Silverberg (Grant Shaud) whom she rudely dismisses ("While I was being maced at the Democratic Convention in '68, you were wondering if you'd ever meet Adam West"), and new co-anchor Corky Sherwood (Faith Ford), a former Miss America ("by default") with no journalistic background. Murphy is over 40 and prickly, with a penchant for vindictive practical jokes against her colleagues. In short, in the words of a lampooning cartoonist in the episode "Funnies Girl," dynamic, "pain-in-the-butt," Motown-loving Murphy is "a veritable fountain of material." 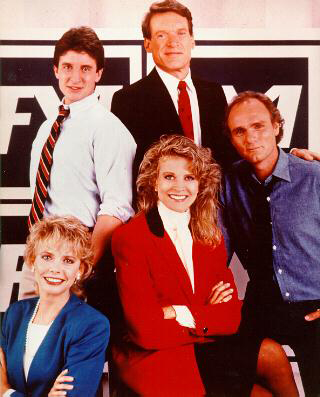 With its smart and sophisticated writing and seamless ensemble, Murphy Brown instantly established itself as one of television's gold standard series, earning four Emmy Awards for this inaugural season, including Outstanding Lead Actress for Bergen and Outstanding Writing for English.


« The Munsters The Muppet Show »