CBS
Added to the database on April 6, 2006
Rate
(14 votes)
Cast & Characters | Broadcast History | Theme Song | DVDs | Watch Episodes | Photos | Trivia | Comments
Good Times is a sitcom that aired 1974 until 1979 on the CBS television network. Good Times is a spin-off of Maude, which was itself a spin-off of All in the Family. 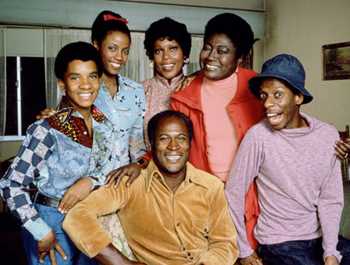 Florida Evans was originally Maude Findlay's maid until, in the spring of 1974, she got a show of her own. Florida and James Evans were lower middle-class blacks living with their three children in a high-rise ghetto on the south side of Chicago. J.J. was the oldest, Thelma was a year younger than he, and Michael was five years younger than she, 10 when the series started.

Trying to make ends meet on the erratic income provided by James, who was always in and out of jobs, made life difficult, but there was always plenty of love in the family. J.J. was an accomplished amateur painter who, though going to trade school, was always looking for some get-rich-quick scheme. His catch phrase "Dy-No-Mite" became very popular in the mid 1970s.

There are currently no items for sale at this time.

In the fourth season, James (the father) left Good Times. He had become a partner in a garage and, just as things might be looking up for the family, he was killed in an auto accident! After a short time with J.J. supporting the family, his mother found a new love and got married again.

Before the next season of the Good Times TV show began, Esther Rolle pretended to be ill so she could leave the Good Times cast. In truth, she was upset over the way that Jimmy Walker's "jive-talking", womanizing and dishonest character (on screen) had become such a bad role model for black youth. The Good Times' writers explained her absence by saying that her new husband had developed cancer and they had moved to the South where the weather would better suit his condition.

Jimmy Walker, in his role as "J.J." was responsible for the catch phrase, "Dy-No-Mite", which became commonly used by the public when something really good happened.

Then, at the beginning of Good Time's sixth season, Esther Rolle reappeared on Good Times, back with her children and without her husband. No reason was ever given for his absence!

Good Times was cancelled due to low ratings in December of 1978 and the "final" episode aired on January 3rd of 1979. Then in May, the network decided to air the final nine episodes which had already been taped and the Good Times TV show truly ended.